Panasonic are one of the most well-known electronics brands in the world, and they produce an enormous selection of products. It should come as no surprise, then, that their range includes a portable DAB radio: the Panasonic RF-D10EB-K. While it may not have the snappiest name in the world, it is nonetheless one of the most popular models we stock. On paper, this Panasonic DAB radio looks impressive. But does it deliver in practise? We put it to the test in our in-depth review process; read on to find out how we got on with the RF-D10EB.

Surprisingly, there aren't that many Panasonic DAB radios on the market. While the company produce a huge range of cordless phones, the RF-D10 is one of their few radios still in production.

Ordinarily, Panasonic don't push many boundaries with their tech design. They tend to favour functionality over style, and the RF-D10EB is no exception to that rule. That's not to say that there's anything wrong with the way it looks- it boasts a nice modern design that's not too obtrusive. However, it doesn't have quite the charm of other DAB radios like the VQ Retro Mini.

The radio's controls are satisfyingly simple. Two knobs on the side. One controls the volume, while the other is used for flicking through menus. We are personally big fans of volume wheels- they just feel more satisfying then endless button-pressing. At a time when many other brands have seemingly abandoned this feature, it's good to see Panasonic keeping things classic.

The screen is a little shorter than average, but it is still a good width. The backlight is nice and bright, so the screen remains clear while it's switched on. What's more, the text on the screen is also a good size, so it's easy to tell what's playing at-a-glance. 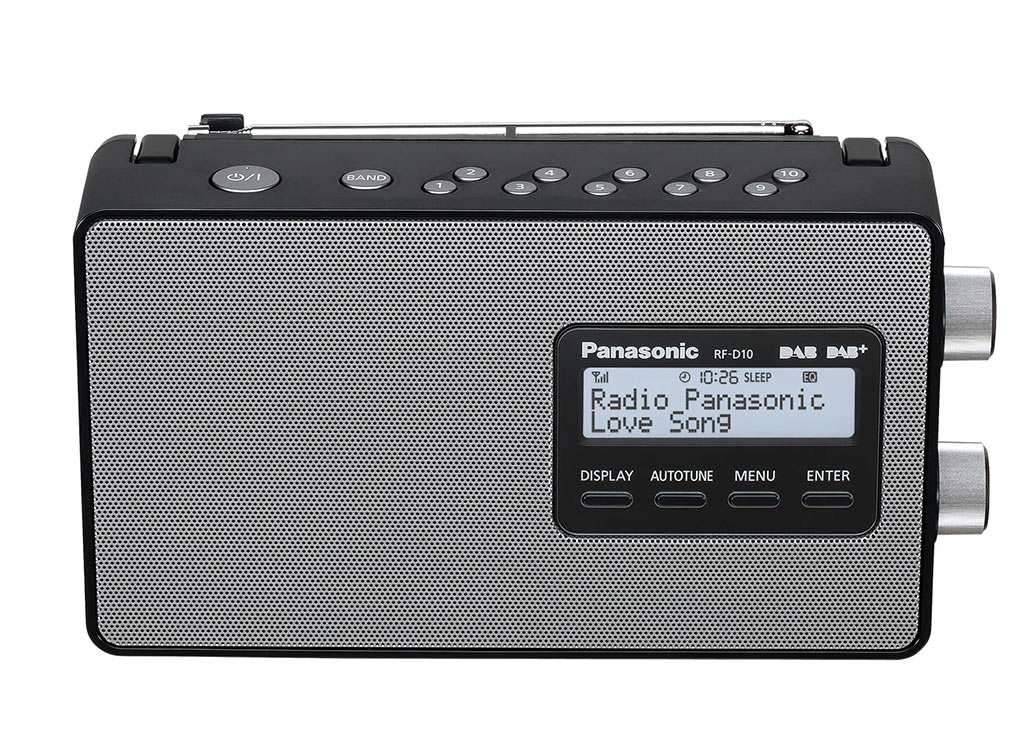 As a DAB radio that's built to be portable above everything else, the RF-D10EB obviously won't be able to compete with more high-end, non-portable DAB radios. This really comes down to its small size- there's less space to fit components inside. However, Panasonic have packed as much as possible into it. The speaker is 10cm in diameter, powered by a 4.5cm magnet driver. This gives it a surprising amount of power for a small DAB radio.

Overall, the sound quality is good- not the best we've heard, but certainly above average. If we had to nitpick, we'd say that the bass performance lets the Panasonic DAB radio down. That's because the speaker is made from a single component, and lacks a woofer- it simply can't offer much of a bass kick. We also found there to be some distortion when the volume was turned up all the way. But we can forgive that. After all, this is a portable DAB radio at the end of the day. It's unlikely to be the main focus of your home hifi setup in the way that something like the Revo SuperConnect might be. For a portable model, though, we found it performs well.

The biggest thing to mention here is that it is portable. There's no need for an add-on battery pack, like you need with the VQ Hepburn. Instead, just pop four type-C batteries in the back of the RF-D10, and you're ready to rock and roll. Panasonic claim you can get up to 30 hours of listening time from one set of batteries. In practise, we found it was closer to 20 hours than 30, but that's still a decent amount of time for a portable radio. One thing to mention, though, is that those C batteries aren't all that common- and they can be pretty expensive. If you're planning on using it a lot, we'd advise you invest in a set of rechargeable batteries. Otherwise, the costs could soon mount up.

In all other regards, though, the Panasonic DAB radio is designed to be as user-friendly as possible. We've already mentioned the bright, backlit screen. One nice touch is that it displays the station name even on FM mode, so you can easily see what you're tuning in to. It also includes ten one-touch preset buttons. This is one area where it has the edge over its rival, the VQ Retro Mini, where you need to scroll through a separate menu to choose presets. On the D10EB, you can instantly select your preferred station. 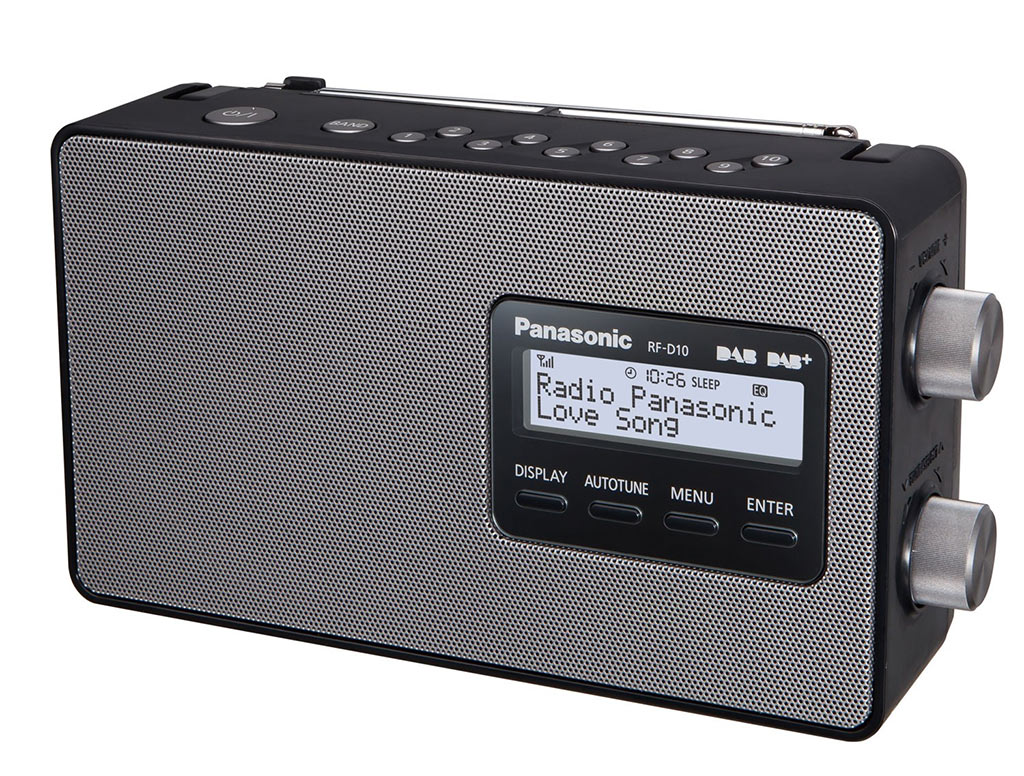 There is something missing here, though: Bluetooth connectivity. If you are simply looking for a portable DAB radio, then this won't be much of a problem. However, most models at this price also include Bluetooth, which means you can listen to your own choice of music, too. This absence may not be a deal-breaker, but for a radio at this price, it's something we've come to expect.

The Panasonic RF-D10EB-K is an incredibly user-friendly DAB radio. The amount of preset options makes it the perfect choice for those who like to jump around the dial. However, the lack of Bluetooth- and the fact that it takes expensive batteries- mean we can't quite recommend it over similarly-priced alternatives such as the VQ Retro Mini. For a reasonably-sized portable radio from a well-known brand, though, it is still a solid choice.