The Siemens Gigaset E500A Big Button Cordless Phone: Stylish and simple to use

The user-friendly Gigaset E500A with answering machine has been intuitively designed for the ultimate ease-of-use. With its extra large keys and clear 1.9” black & white display, it is ideal for those with poor vision. It’s stylish, too, having won the prestigious Reddot design award upon release. The cordless phone is also hearing aid compatible, meaning anyone can enjoy the enhanced acoustics and exceptional call clarity of the E500A.

Remarkably easy to use

The Gigaset E500A features well-proportioned, separated keys on an illuminated keypad. This makes dialling numbers and navigating through the simple menu layout of the handset incredibly simple. Even those with poor eyesight should have no trouble using this cordless phone. What's more, the size of the font can also be increased to make it clearer. For added convenience, there are four speed dial keys, which can be programmed so that the most important numbers are available at just the touch of a button.

Gigaset are renowned for manufacturing some of the best cordless phones when it comes to sound. With the E500A, though they have gone a step further than usual. The handset is specially designed to be hearing aid-compatible. It also boasts enhanced acoustics and HSP technology, which eliminates distortions from calls for superior clarity than a standard landline phone. The handset also benefits from an integrated speakerphone, which can be activated with the touch of a button and offers users the opportunity to enjoy enhanced sound quality in hands-free.

The base station of the E500A features an integrated answering machine. With an LED message counter, you can easily see how many messages have been left. Offering up to 25 minutes of recording time, messages can be played back directly at the base using the loudspeaker and control keys, or from the cordless handset itself.

Boasting a dependably long talk time of up to 20 hours when fully charged, the E500A is perfect for talkative users. The standby time is similarly impressive at up to 240 hours. This makes the handset equally suitable for those who use the phone less often (or forget to charge the handset). The base provides a reliable range of up to 300 metres outdoors for those who like to take the phone into the garden, and up to 50m indoors. Lastly, an energy-saving power supply means that it consumes less electricity so is kinder to the environment and helps save money on the electricity bill. 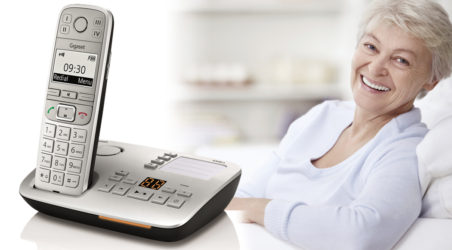 The Top Gigaset Phone For The Elderly

Christmas Extended Returns Policy: Purchases made from the 18th November can be returned for a refund or exchange up until the end of January 2021. For further information our Customer Services are available Monday to Friday by phone 03333 44 80 44, email helpdesk@ligo.co.uk, and LiveChat.