The VQ Hepburn is a stylish DAB radio from one of our favourite audio brands. It's the second model to bear this name, after the Mk I that came out a few years ago. VQ have made a lot of improvements for the Mk II, addressing common issues that users had with sound and build quality in particular. Have they managed to create the perfect DAB radio? We put the Hepburn to the test in another of our in-depth reviews.

Naming your DAB radio after one of the 20th century's most iconic individuals certainly sets the bar high for design. However, VQ have pulled out all the stops with the Hepburn, creating a very stylish DAB radio indeed. Unlike the Retro Mini, which is clearly inspired by the 1980s, the Hepburn is a little more timeless in its design. It comes wrapped in a leatherette casing, which helps lend it a more premium feel, and there's an enormous range of different colours to choose from. This wraps all the way around the radio, too, so it even looks nice from the back! 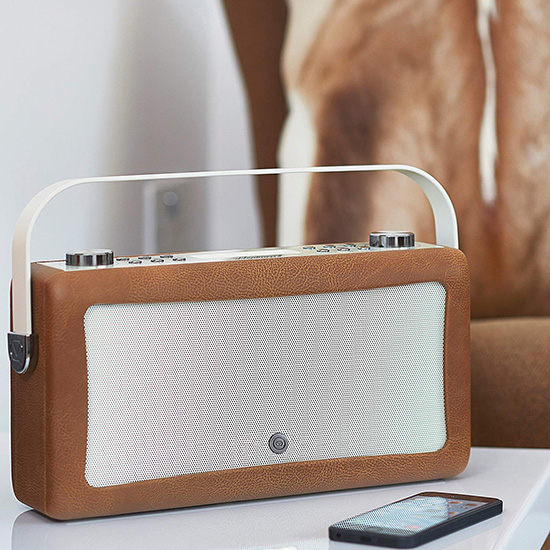 It also has something which VQ's other radios lack: a volume dial. This is a small touch, but we found it makes a key difference in practise. If you're using the radio while out and about, or just need to turn it down quickly, then this is a welcome addition. There's also another dial for switching between stations- again, it's a little bit nicer than using buttons, and is a better fit with the Hepburn's retro feel.

There's a small screen on the top of the radio, along with all the other controls. If we had to find fault with the Hepburn, then this would be it- there's no way to see it unless you're actually operating the radio. But then again, having a more prominent screen would detract from the overall look of the Hepburn. We didn't find this much of an issue, but it might affect some users- especially if you like to listen to the radio while lying in bed.

At first glance, you might assume that the VQ Hepburn is portable. It is- but only if you purchase the additional battery pack, which we'll come to later. If you do have a battery pack, though, the handle on the top is a nice touch. Overall it's a good shape for carrying about, too- it bears more than a passing resemblance to a handbag.

A DAB radio needs to do more than just look good, though. Sound quality is much more important- otherwise you'll be left with an expensive, if pretty, ornament. So, we put the Hepburn's speakers through their paces, flicking through all available stations and streaming music in a wide range of different genres. 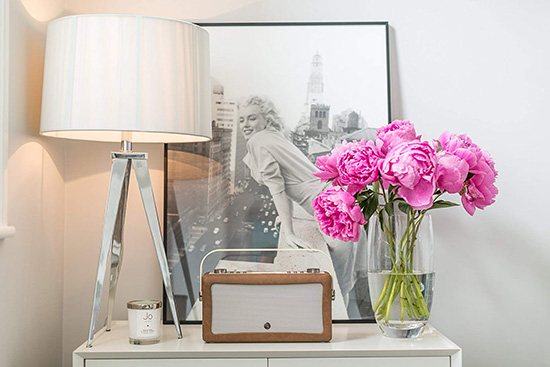 Despite being fairly compact, the Hepburn packs a rather powerful punch. The two 10W speakers give it a total 20W output, so it can comfortably fill a medium-sized room. That's unusual in a portable radio, since these tend to favour size over volume.

Out of the box, the Hepburn tries to please everyone with its default sound profile. It sounds good enough for most ears, but naturally it's not necessarily going to be the best setup for whatever you're listening to. Thankfully, there are adjustable EQ settings that you can play about with to your liking. By tweaking this, we managed to get some truly tremendous audio out of the Hepburn.

Like many DAB radios nowadays, the VQ Hepburn also comes with Bluetooth functionality. That means you can connect up your smartphone or tablet to stream music. When the speaker sounds this good, that's definitely a plus! There's also an aux cable if your device doesn't have Bluetooth, and a 3.5mm headphone jack

The Hepburn also has a few features that make it ideal for use as a bedside radio. For one thing, there's the dual alarm setting, so you can wake up with your favourite station. But that tends to be a given with radios nowadays. We were much more impressed by the USB charging port, which allows you to power up your phone overnight.

But that's not all that the Hepburn has to offer. With the optional battery pack, it's also fully portable. According to VQ, it can provide up to 25 hours of listening from a single charge. In practise, we didn't quite achieve that, but still got a respectable 18 hours or so out of the battery pack. That should be more than enough for most users, and recharging is as simple as plugging the radio into the mains. The Mk I version of the Hepburn only took standard batteries. In contrast, the rechargeable power pack makes the Mk II a much more convenient and viable option for portable listening.

We're big fans of the VQ Hepburn here at liGo. Not only does it look great, but it's also a solid performer with a surprisingly strong sound profile. More than just a pretty face, it's a worthy choice if you're looking for a new DAB radio- especially if you need something portable.