The kingpin of Revo’s SuperSeries range, the SuperCD is a seriously impressive unit. Not only is it a CD player, but it also comes with DAB radio and internet radio built in. But does it live up to the company’s stellar reputation? We’ve carried out extensive testing to put the Revo SuperCD through its paces. Read on to discover whether or not it is really worth the price tag. 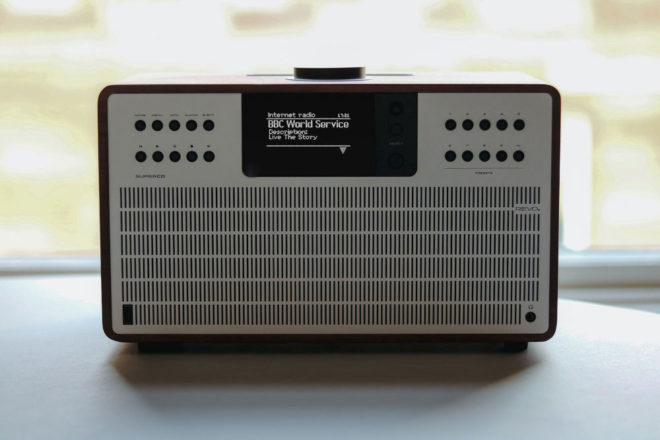 Before even taking the Revo SuperCD out of the box, it’s obvious that this is a seriously hefty piece of audio equipment. Weighing in at over 7kg, let’s just say that this DAB radio isn’t going to fit on your bedside cabinet- not unless you reinforce it beforehand. But a beautiful piece of design like this would be wasted if it were tucked away out of sight. As the largest Revo model currently on the market, it really shows off what makes these DAB radios special.

There’s a gorgeous walnut wood casing, with volume control and CD slot on the top. Discs are loaded in vertically, which adds to the retro-futurist feel. The front panel, meanwhile, really looks the part, with a vintage design to it. In our SuperConnect review, we mentioned that model resembles a vintage hifi. The SuperCD takes that to the next level- with the way that the controls are set out, along with the wider body, it’s almost like a genuine guitar amp from the mid-Seventies.

While we’re on the topic, those controls are another high point of the SuperCD. On the left, you’ve got all the options you need- play/pause, switch modes, and so on. On the right, you'll find a generous 10 preset buttons. That means you can instantly access your favourite DAB and internet radio stations with a single touch. In the middle, you’ve got the screen, along with a nifty control stick that makes flicking through menus incredibly simple.

Unlike other Revo DAB radios, there are only two colour options here: Walnut/Silver and Walnut/Black. That’s not really an issue, though; we personally prefer the walnut casing, since it gives the unit more of that mid-century feel. Sat alongside a vintage amp in our hifi setup, it didn’t seem at all out of place. What’s more, the wood isn’t just for show. It also makes a real difference to the SuperCD’s acoustics- which we’ll come to in just a moment. 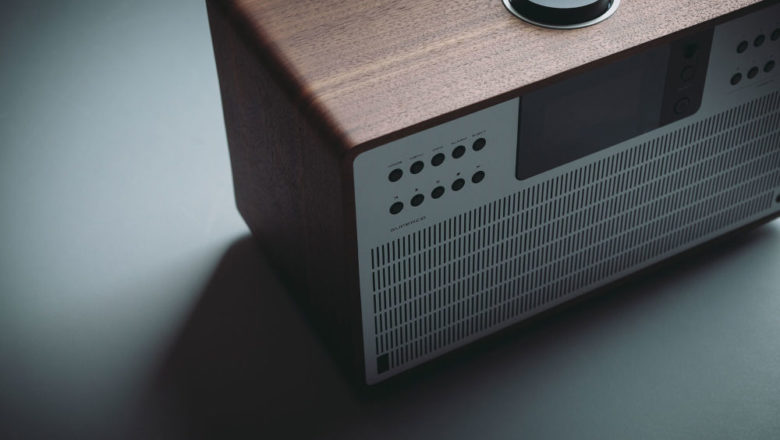 Like Revo’s other DAB radios, the SuperCD boasts some seriously powerful audio components. Most significantly, it includes the company’s own custom Balanced Mode Radiator speaker drivers. These help achieve a rich, dynamic sound from smaller speakers. They make a huge difference even on smaller models, but the larger scale of the SuperCD really lets it rip. The CD player's innards take up a fair chunk of the space inside, but there’s still plenty of room for some extra audio wizardry.

For one thing, the SuperCD is stereo, unlike the mono SuperConnect and SuperSignal. This fact alone makes it a major step up, but there’s still more to consider. Most importantly, the CD player ups the ante considerably. Playing a CD directly, as opposed to streaming over Bluetooth, demands a lot more audio oomph. The difference between streams and CDs is like comparing an old black-and-white TV with a modern plasma screen. Since people mostly listen to music on cheap headphones nowadays, this difference isn’t always obvious. On a large sound system like this, though, clarity is everything. If the system isn’t to standard, then this will be obvious from the moment the music starts playing. Is the SuperCD up to the challenge? There was only one thing for it- pop in a disc and test things out for ourselves. 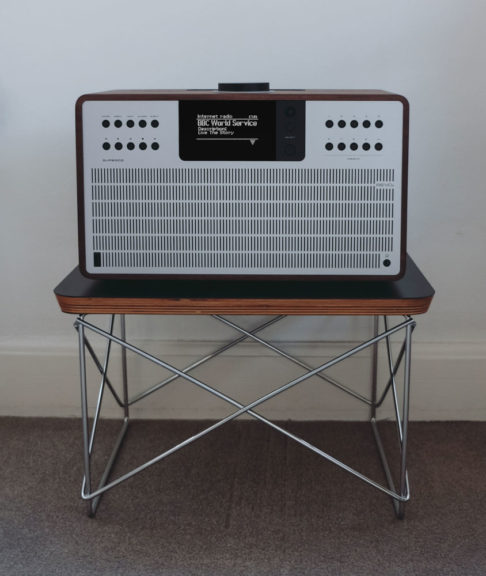 How does the Revo SuperCD perform in practise?

A big beast like the Revo SuperCD demands an equally in-depth album for testing purposes. So, we sat down in front of the unit and popped in a copy of The White Album. That gave us roughly 90 minutes of straight listening to put the unit through its paces. What’s more, there album has a wide selection of music spread across its two discs. From the proto-heavy metal of “Helter Skelter” to “Blackbird”’s gentle folk, there’s a lot going on here. That makes it pretty demanding on a hifi. Some models are built for sheer bass power, while others are made with high-end in mind. It’s a rare beast, though, that can cope with everything that you throw at it.

As “Back In The U.S.S.R.” faded in, we knew we were in for a treat. From the moment the drums kicked in, the timing was perfect, and we couldn’t help but tapping our toes along with the beat. The SuperCD packs a powerful punch in the form of bass performance, too. It needed a little turning down from the default settings, but once we found that sweet spot, it was perfect. The same thing goes for high-end frequencies, too, making the SuperCD a great all-rounder.

The separation is superb, with every element of each track nice and clear throughout the test. The same thing goes for stereo separation, too. With the speakers being so close together, we were expecting there to be quite a bit of overlap between the left and right channels. We’re happy to say, though, that this isn’t the case. Both speakers do a decent job of projecting their channel out without muddying the overall sound.

We won’t bore you with a full 30-track run-through. The main takeaway is that the SuperCD is built to cope with just about anything you might throw at it. The bass and treble gel together supremely well, without stepping on each others’ toes. Whether you like out-and-out rock, or if quieter tracks are more your thing, there’s a lot to love here. Even cacophonous sound-collage “Revolution 9” sounded listenable- and that’s saying something! 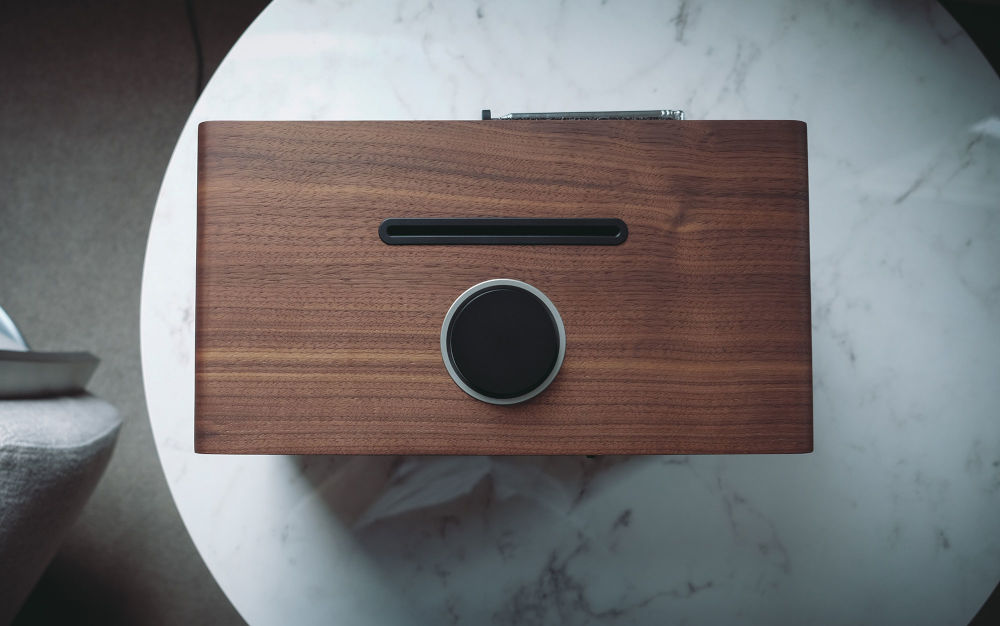 By this point in the review, it should be clear that the CD player is the major feature of the Revo SuperCD. In an era of low-quality MP3s, the format is the perfect way to rediscover the sheer power of music. We’re sure most of you have more than a few CDs tucked away somewhere, and the SuperCD will have you scrambling to the loft to dig out all your old discs. In fact, that’s exactly what we did; after the “official” test was over, we spent a couple more hours popping in various albums and letting the music wash over us.

That being said, this is more than just a CD player. The Revo SuperCD is built on solid foundations, with all the features you’d find in its smaller siblings. At its heart, this is still a radio, and both DAB and internet modes work extremely well. Setting up a WiFi connection is simple, since the unit talks you through the whole process. With that done, you can tune into tens of thousands of online stations across the globe. Whatever your tastes, you’re sure to find the perfect station if you go looking for it.

The Revo SuperCD also comes with a plethora of connection options. With both RCA and AUX input, you could theoretically hook up almost anything with the right connectors. For reference, we linked the SuperCD up to a turntable to test this out. In this case, the rich, deep bass tones of the SuperCD really complemented the vinyl format beautifully. If you're looking for a quick blast of music, though, then it also includes aptX Bluetooth connectivity. That means you can seamlessly stream content from your phone or tablet without the loss in quality that comes from conventional Bluetooth. The SuperCD even includes Spotify Connect for instant playback- the perfect way to get the party started.

We came into this review with high expectations, but the Revo SuperCD more than matched them. The audio quality is among the best we've ever heard, and the range of playback options make it the ideal music hub. While it's not cheap, we think that it's well worth every penny.


This entry was posted in Reviews, Audio, DAB Radio Reviews and tagged Revo SuperCD on 02/11/2018 by Daniel.