The Pure Evoke H4 is one of the flagship models from the UK's best-known DAB radio brand. Pure were one of the first companies to get on board with DAB, and they have consistently led the market when it comes to sales. Their Evoke range is certainly popular- but how does the H4 stack up against the competition? We put it to the test in another of our in-depth reviews- read on to find out how we got on with it.

Pure are well-known for their signature style, and they have brought this to the table once more with the Evoke H4. Crafted from real wood, it is available in either walnut or oak. Both look great, but we'd have to give the edge to the oak here- it lends itself better to the overall look of the radio. Unlike many so-called "wooden" DAB radios, this isn't just a casing- the whole body of the radio is made from a single piece of wood. Not only does that make it look nice, but it also gives the Evoke H4 a fair bit of weight.

The Evoke H4 is also very easy to use. Unlike the H3, all the controls are on the front rather than the top. One wheel controls the volume, while the other is used to scroll through the menus. The power button is somewhat confusingly labelled "Bluetooth", but this feature is actually accessed through the "Source" button. Other than that, everything is fairly intuitive, and we found that we got to grips with the Evoke H4 very quickly.

One last thing to note is that the Evoke H4 boasts a 2.8" colour screen. This sets it apart from the vast majority of DAB radios at this price point, which tend to only feature a monochrome screen. We found that this made it considerably easier to navigate through the various menus, and it also shows what source you are listening to at a glance. 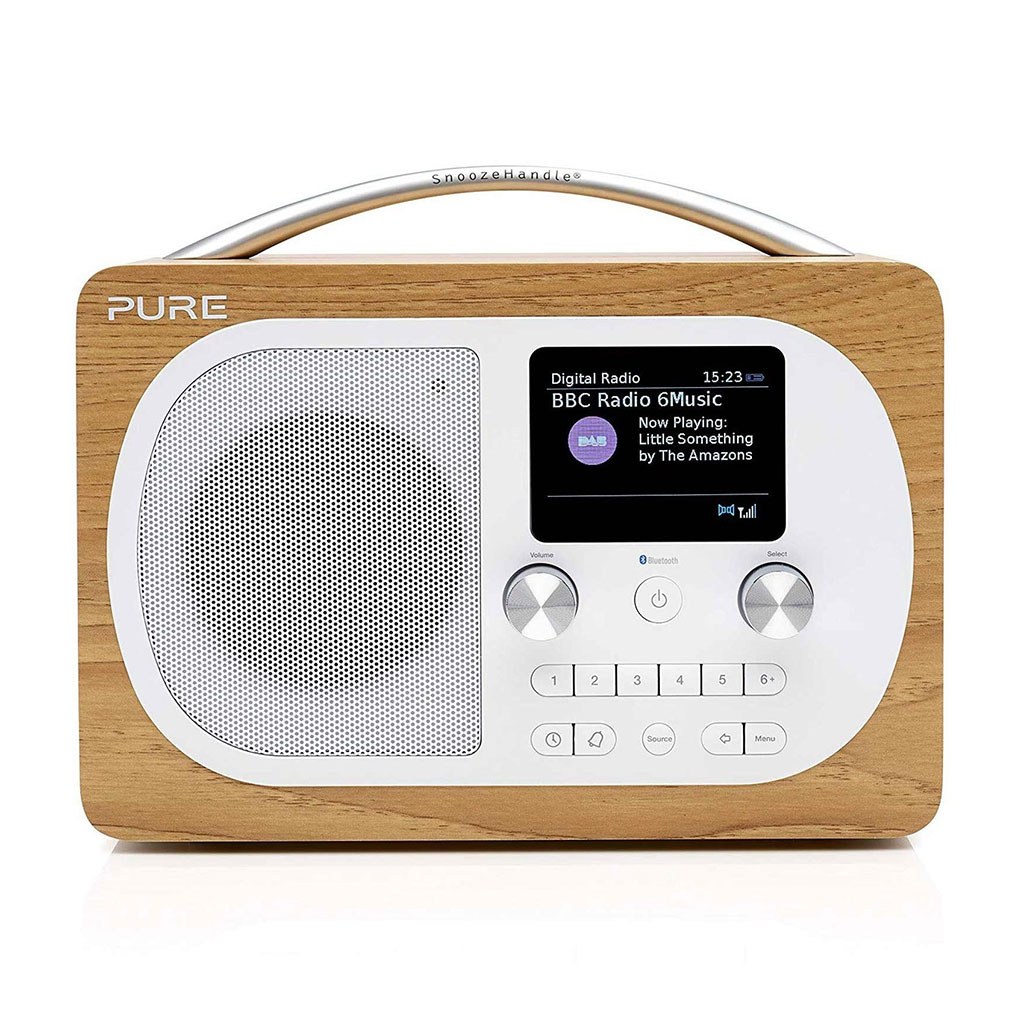 The Pure Evoke H4 might look great, but that's all for nothing if its sound performance isn't up to scratch. Thankfully, the H4 excels in this area as well. It's powered by a Class D amplifier, which is the same technology that you'll find in many high-end speakers. The wooden body has an effect on the audio quality too, helping the Evoke H4 to provide a rich, full sound.

As a medium-sized DAB radio and Bluetooth speaker, the Evoke H4 can go pretty loud if you crank the volume all the way up. Don't expect it to rattle the window frames like much larger models can. However, if you want a radio that can comfortably fill your living room with sound, the H4 is a solid choice.

On its default settings, we did find that the Evoke H4 could sometimes be a little overpowering when it comes to bass. Luckily, though, there's an EQ menu that allows you to adjust the sound profile to your liking. 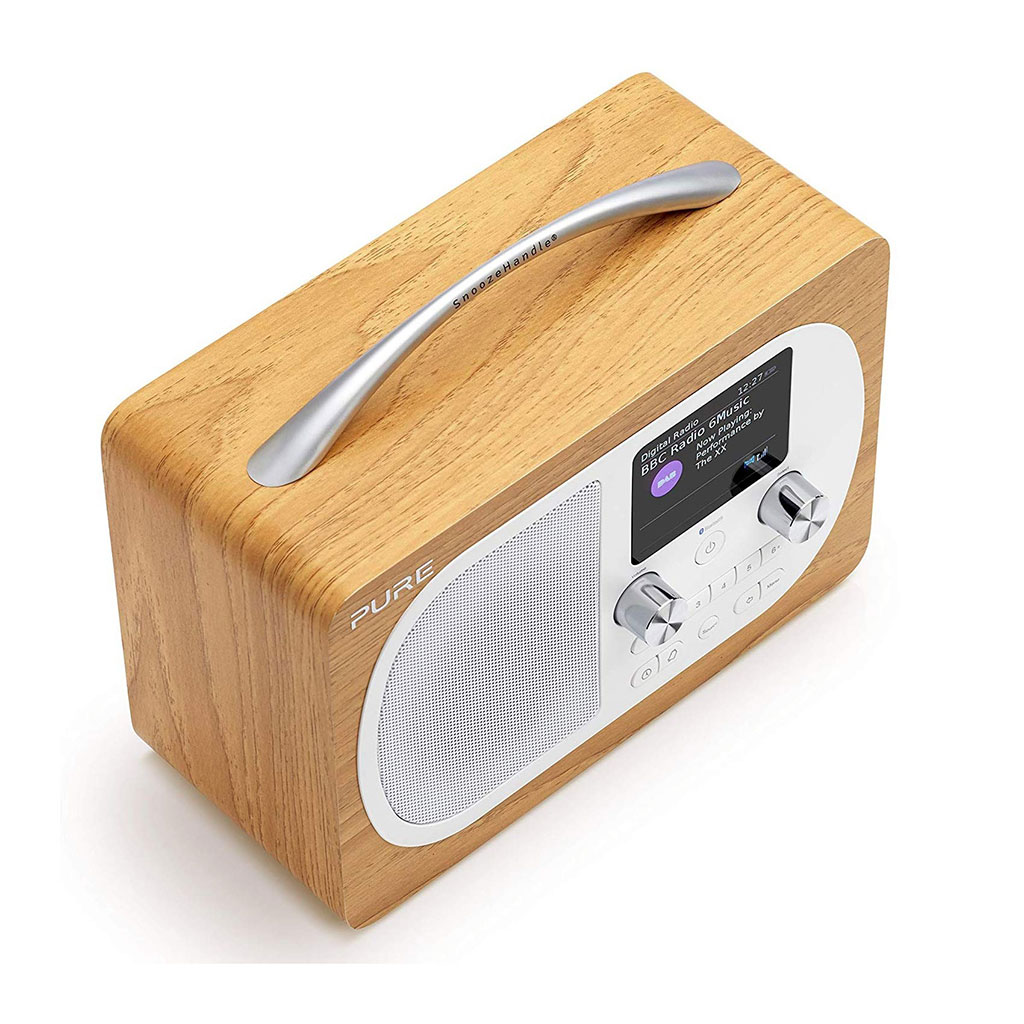 For added ease-of-use, the Pure Evoke H4 also has an intuitive presets system. If you want to save the station you're currently listening to, just press and hold one of the preset buttons. You can access five stations with a single touch, while there's space for up to 40 in a separate menu. Surprisingly few DAB radios actually have one-touch preset buttons, so five of them is a welcome addition to this radio.

The Evoke H4 includes a dual alarm function, making it a great choice for a bedside DAB radio. Users can set one alarm for weekdays, and a later one for weekends to enjoy more of a lie-in. The handle on the top of the Evoke H4 also acts as a snooze button.

The Evoke H4 is more than just a DAB radio, though. It also has built-in Bluetooth connectivity, so you can also stream music from your smartphone or tablet through the H4's powerful speaker. And if you want to listen to something from a wired device, there's also a 3.5mm aux-in port on the back, too.

Lastly, the Pure Evoke H4 can also be made fully portable with the optional battery pack. At around £35, it's considerably more expensive than the equivalent from other brands. However, it does offer up to 50 hours' listening time from a single charge, which is a lot more than most battery packs provide. That means you won't be constantly plugging it in to recharge. 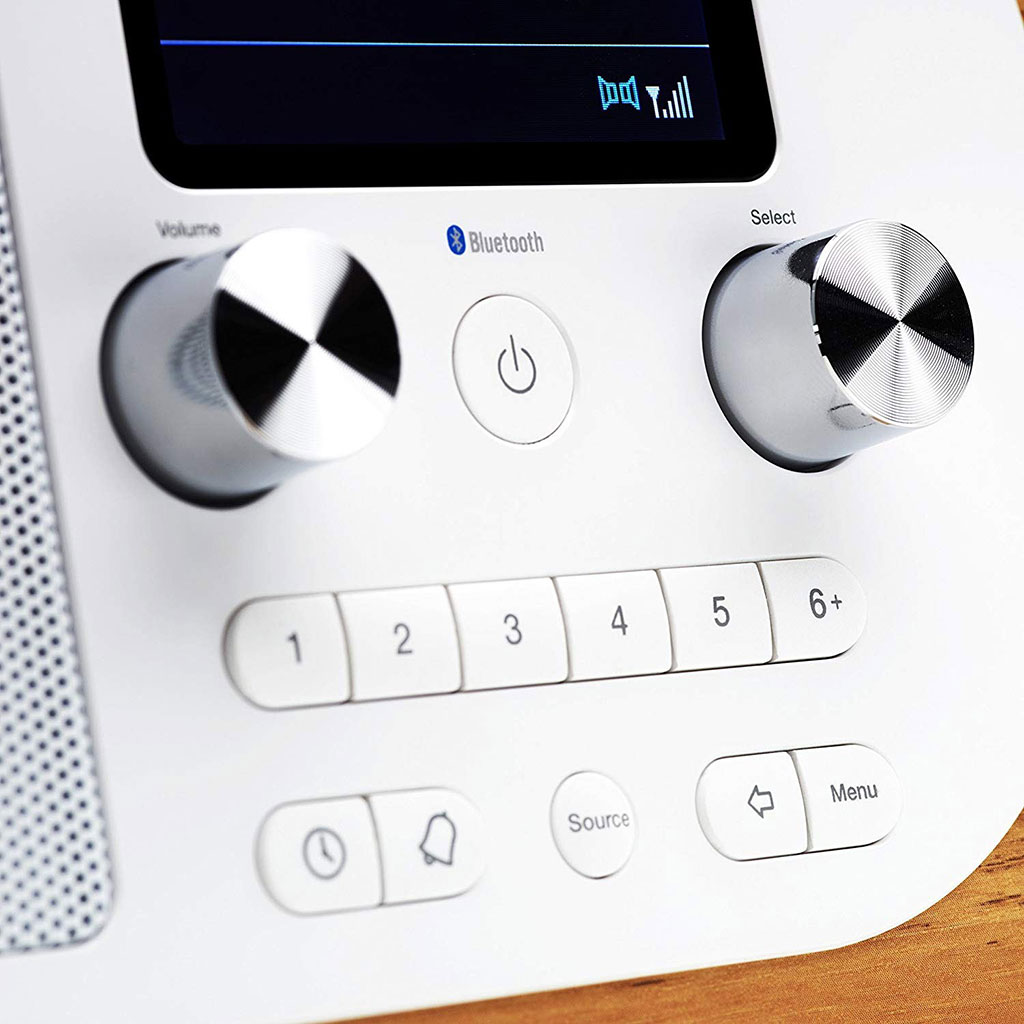 The Pure Evoke H4 is another superb model from the UK's leading DAB radio brand. With a stylish design and powerful sound, we think it's one of the best mid-range radios on the market. With Bluetooth connectivity as well, along with the option to make it portable, we think the H4 is well worth splashing out on.