The Motorola T92 is the brand's flagship two way radio, going above and beyond other models to offer something truly special. It's also our current best buy walkie talkie at the time of writing- so you can already tell that we're big fans of it. To give a bit more insight into why we rate this particular model so highly, we took it out for a test run- read on to see how we got on!

On paper, the Motorola T92 offers up to 10km range. This puts it towards the very top end of what you can expect from a license-free radio. Of course, that's only the stated range, and not necessarily what you'll achieve in practise. To get a better idea of how they really perform, we tested them for ourselves.

First up, we took one of the T92s out to a nearby park, with the other radio remaining in the liGo offices. In such a built-up area, many radios will struggle to get a signal even from one end of a road to another. The T92 managed to stretch just over a kilometer before the signal started to cut out. While that's quite a drop from the maximum range, it's excellent given the surrounding environment. If you're planning on using the Motorola T92 in your workplace (such as a warehouse or building site), then you'll certainly find it more than good enough.

Out in the open countryside, it's a completely different story. Without any obstacles to block the signal, you can expect a much longer range from your T92s. We tested them out just outside Glasgow, and we achieved up to 5 kilometers, depending on the exact location. If you took them up to higher altitudes with a clear line of sight- a ski slope, for instance- then you could well get close to that 10km maximum range. 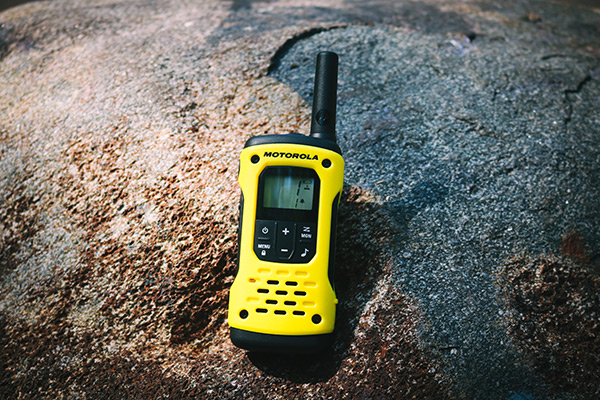 Not only does the Motorola T92 offer great range, but it's remarkably easy to use, too. In fact, our testers didn't need to look at the instructions once; all the controls are very intuitive. Just power up, make sure the radios are all set to the same channel, and you're ready to go. Simply hold down the button on the side of the radio to talk, and release it when you're done to enable incoming transmissions. Easy!

The T92s also come with rechargeable batteries, which offer up to 16 hours' use from a single charge. That means you won't have to keep forking out for disposable batteries. Each twin pack of radios also comes with a dual USB charger, so you can power up both of them at once. In theory, you could purchase some spare batteries and swap them out to get even more continuous use out of the T92s. However, you'd need a screwdriver for this, and in practise we found the process a little fiddly.

If you need to use your two way radios hands-free, then you'll be pleased to hear that the T92 comes with VOX functionality built-in. With this mode turned on, the radio will automatically start transmitting when it detects the sound of your voice, and then shut off when you stop speaking. Plus, each radio comes with its own detachable belt clip. This really opens up your possibilities for when and where you can use the T92s- if you need to keep in contact with others while still doing something else, the T92 is the ideal choice.

There's one feature that makes the T92 really stand out from other Motorola two way radios: it's waterproof. With an IP67 rating, it's more than just weather-resistant; it can survive being dropped in water. The T92 also has a built-in floating core, which makes it great for things like kayaking. Thanks to its bright yellow casing, it's easy to spot in the water as well.

Take a look at the bottom of the T92, and you'll notice that it has an LED torch fitted inside. That's a handy feature to have, since it saves you from carrying a separate torch with you if you're using the radios at night. If you drop the radio in water, then the torch will automatically switch on to help you find it.

As you can see, the T92 comes with plenty of survival features that make it perfect for outdoor use. Even the detachable belt clips have an added feature. Each one also doubles up as a whistle. So, if your radio dies on you and you need to signal to others where you are, you've always got a backup plan!

Finally, each twin set of Motorola T92s comes in its own carry case. We found that you can comfortably fit a third radio in too, if you want to save on space. Most two-way radios come without a case, so this is a great addition that makes the T92s even better value for money. There's space inside to fit chargers in as well, so that you've always got them handy. 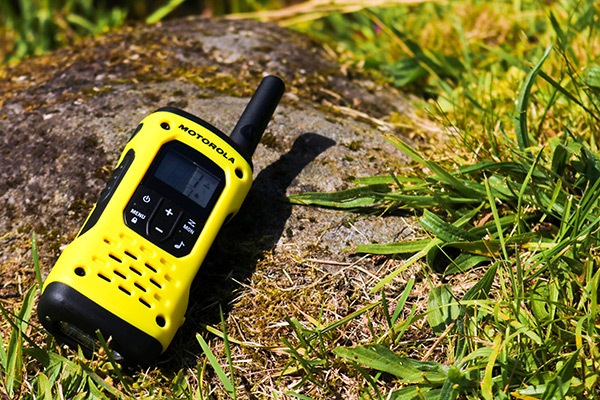 The T92 is an extremely impressive two way radio. As well as providing excellent range for a license-free model, it is also packed with handy features. The fact that it is waterproof makes it that much more versatile, and the included case makes it fantastic value for money. Whether you're using it for extreme adventures or just in the workplace, the Motorola T92 is undoubtedly one of the best two way radios around.


This entry was posted in Reviews, Two Way Radios and tagged Motorola on 15/08/2019 by Daniel.