The Motorola TLKR T80 Extreme is the latest high-spec walkie talkies to be released in the popular TLKR range. If you're thinking about purchasing a set of Two-Way Radios it's important to consider: what they are primarily going to be used for, where they are going to be used, over what distances, and certain features you might require (such as hands-free).

The TLKR T80 Extreme comes in a handy carry case for convenient storage and transportation. The bright yellow design serves to make the handsets easier to see, and they boast a durable build for use in more demanding environments.

The handsets are easy to set up and start using straight out the box. Those with less than 20-20 vision might need to dig out their glasses in order to read the print in the user manual. The instructions themselves, though, are straightforward and clear. 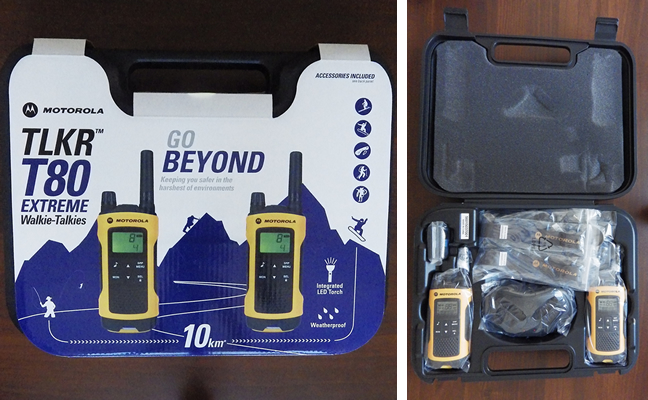 It is recommended to charge the handsets for 14 hours before using them for the first time. This is definitely something to consider if you’re planning to use them straight away. However, you can also use 4x AAA batteries in each handset. You can then charge the battery packs independently from the handsets using the dual-top cradle and included dividers, which can come in handy. 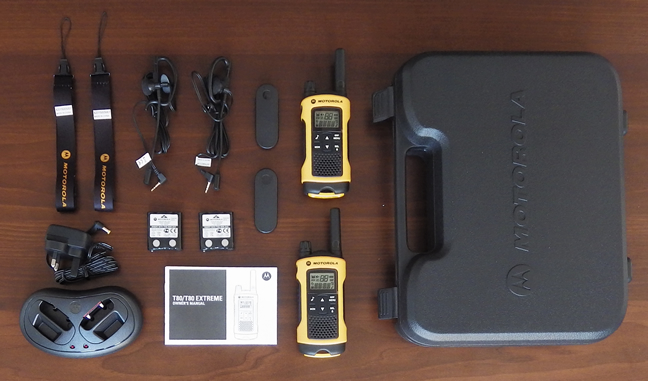 The handsets are extremely user-friendly and have a nice weight and feel to them. Included with the pack are two belt-clips, which attaches the handset to your belt (or bag strap, or clothing...) quite well. Selecting channels and sub-codes is straightforward whether you’re familiar with Two-Way Radios or new to them. Setting up a group does require a little programming, but is simple enough when following the guide.

We tested the TLKR T80 Extreme in both an urban setting and in open countryside and the range provided is about as good as you’re going to get from a license free walkie talkie. Above 500 mW transmission power (for which a radio licence is required and the costs get drastically higher, the average range will only ever be 1-3kms in an urban environment and up to about 5kms in open flat countryside. This was consistent with what we experienced; providing just over 2km in Glasgow’s built up city centre; and just about 5km  when we tested them out in flat open countryside. Unfortunately, the budget didn’t stretch to a mountaineering expedition up Kilimanjaro, Everest, or even Ben Nevis. But we're confident that the T80 Extreme would go the full distance of 10km (if not further) in optimum surroundings.

When it came to performance of the handsets in terms of battery life, the T80 Extreme fared well. The handsets lasted a full days worth of testing (over 8 hours) and were still going strong when we finished up. It does take 14 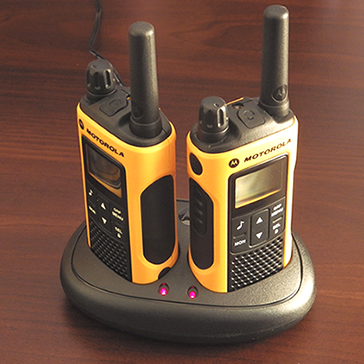 hours to fully charge the handsets, but (as I pointed out at the start of the review) you can charge the batteries separately. 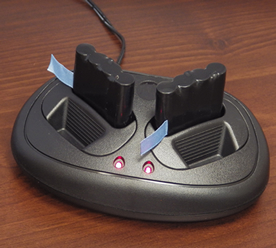 The TLKR T80 Extreme includes all the features you would expect from a set of two-way radios at this price. The hands-free VOX function works well and you can adjust the sensitivity depending on how loud the environment your in; there's a lag of maybe half a second between when you start to speak and the handset transmitting. Overall, though, we found the performance to be pretty good. There are two headsets included with the kit. Admittedly, they aren't the most attractive or comfortable to wear. The build is a lot more flimsy than the handsets. That being said, though, they are not uncomfortable, and are lightweight. They also work well in conjunction with the VOX setting. That means they would be ideal for skiing, or any other activity you need to keep your hands-free. The handsets benefits from an IPx2 rating, which means that they are effectively weatherproof though as we experienced a rare day of sunshine in Glasgow whilst testing we never did get to enjoy the benefit of this.

The Motorola TLKR T80 Extreme may be on the expensive side for a set of Two-Way radios but if you're looking for robust handsets, these are as solid as they come. The T80 Extreme are also likely to give you the longest range you're going to get (without incurring the costs of a license and compatible handset) and provide an impressive battery life. And if you like the look of the handset but don't require something quite so sophisticated, you can check out the some of the other models in the TLKR range.


This entry was posted in Reviews, Two Way Radios and tagged Motorola, walkie talkies, 2-Way Radios, TLKR on 14/03/2015 by Craig.