The Motorola TALKABOUT T82 is one of the brand's most popular two-way radios. As the flagship model of their recent TALKABOUT range, it promises a lot, from long range to an impressive array of features. But does it live up to those claims? We put it to the test in another of our rigorous reviews- here's how we got on.

First up, let's take a look at the range. This is perhaps the most important factor to consider when buying a new set of two-way radios. It will affect just how you use them, and whether or not they are fit for purpose.

The Motorola T82 claims to offer up to 10km range in optimum conditions. That's further than most, but of course, it doesn't necessarily reflect the range you'll achieve in practise. Most people won't be using these radios to talk from one mountaintop to another. To find out how they really perform, we took the TALKABOUT on a walkabout around Glasgow. 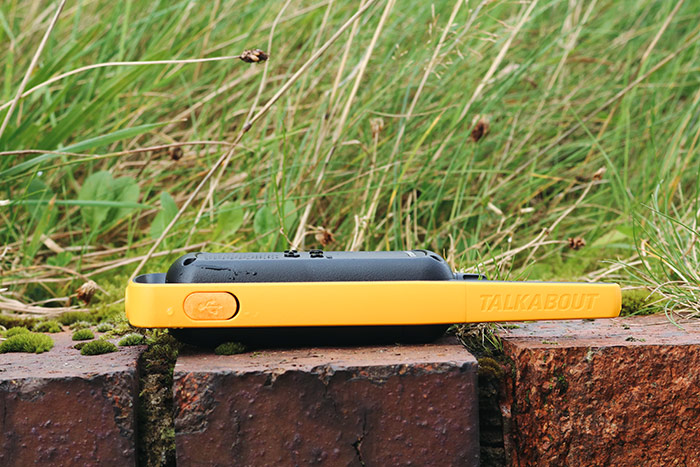 In practise, the T82 perform exceptionally well. In the heart of Glasgow city centre, where there are a lot of tall buildings to get in the way of the signal, we managed to achieve range of about one kilometre. As we moved further out, where the buildings are less dense, that extended to just over two kilometres- a respectable performance that will likely be more than enough for most users in urban areas.

If you're planning on using the T82s while skiing or hiking, then the T82 is an excellent choice, offering close to the maximum range. But even at closer range, such as in a warehouse or school, these radios are still worth considering, since they outperform most other radios at a similar price.

The TALKABOUT range in general look a whole lot better than their predecessors, the TLKR range. They have a much more modern design, with a completely different body shape. But this is more than just a cosmetic touch- it also makes the newer two way radios that much easier to use. At the bottom, there's a handy handle, which makes it easy to grab the radio. What's more, the screen is actually set into the body of the radio itself. Not only does that reduce glare and make it easier to read, but it also means the T82 can survive a bit more punishment. 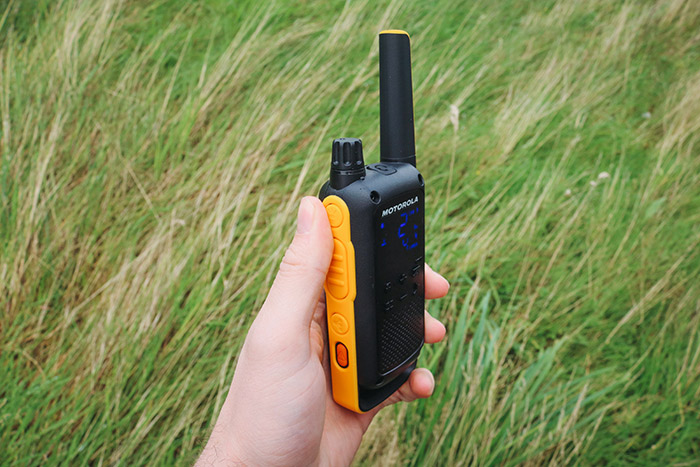 When using two way radios, it can be frustrating to manually check that all the radios in your setup are programmed to the same frequency. Thankfully, Motorola have included an easy pairing button to make things a whole lot simpler. Just hold down this button on each of the radios in your set, and they will automatically tune themselves to the same frequency. Simple!

The main thing that we should mention here is that the T82 is weatherproof. With an IPx4 rating, it is the ideal choice if you need to use a two-way radio outdoors. It's by no means indestructible- unlike the Motorola T92, for example, it won't survive being dropped in water- but it's definitely one of the more durable walkie talkies we've seen. 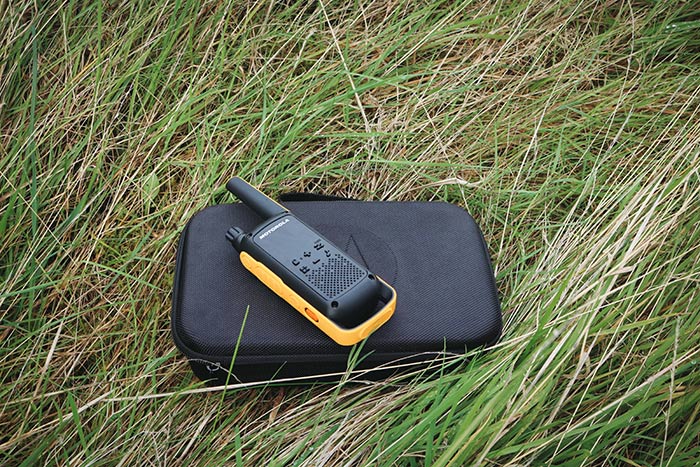 As we already mentioned above, the Motorola T82 comes with an easy pairing button. This helps to make it that bit simpler to use. The T82 also comes with VOX, or voice-activated transmission. In essence, this means that you can use the two-way radios completely hands-free. Speak, and the radio's mic will pick you up and automatically start transmitting. When you stop speaking, the transmission is shut off again. Coupled with the included belt clips, this makes the T82 ideal for hands-free use. It's not too heavy, either, so it's comfortable to wear and won't get in your way.

The T82 even comes with a built-in torch on the top of the radio. This is a handy feature, since it means you'll have less kit to carry about. If you need to read a map in the dark, or find your way through some treacherous terrain, then it's always good to have a torch at hand.

The Motorola T82 is available in both Extreme and non-Extreme versions. The Extreme version includes some handy extra kit, including a carry case and detachable earpiece. If you're planning on putting your new walkie talkies through some serious usage, or just want the convenience of a case, then the Extreme model is well worth the extra cost. 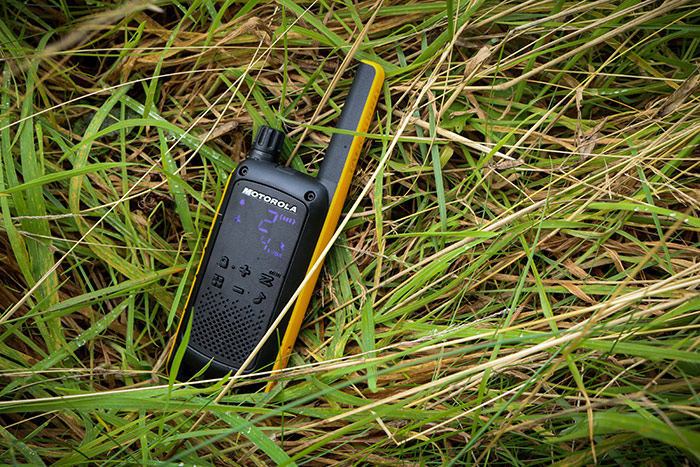 If you're looking for a good quality mid-range two-way radio, then the TALKABOUT T82 is a great pick. With a long maximum range, durable build, and weatherproof construction, these walkie talkies are suitable for a wide range of uses. Whether skiing, hiking, or in the workplace, the T82 makes for an excellent companion.