The Jabra Speak 710 is a new premium portable conference speakerphone, which has been designed to provide outstanding sound quality on conference calls and for music. Compatible with all leading UC platforms and offering connection to a smartphone, tablet, or laptop in seconds via USB or Bluetooth®, it follows in the footsteps of the Speak 510 as an alternative to more cumbersome conference units. Unlike the Speak 510, however, it comes with a hefty price tag which might be off-putting for more price conscious users but hints at the marked difference in quality between the two. We were lucky enough to get our hands on a couple to find out how much more you get for your money and we weren't disappointed. Read our full review below:

There is no doubt that Jabra have certainly put the effort into getting the look and feel of the Speak 710 right. It is lightyears ahead of the Speak 510 featuring a far sleeker design. It is slightly larger but still conveniently portable and comes with an included travel pouch. 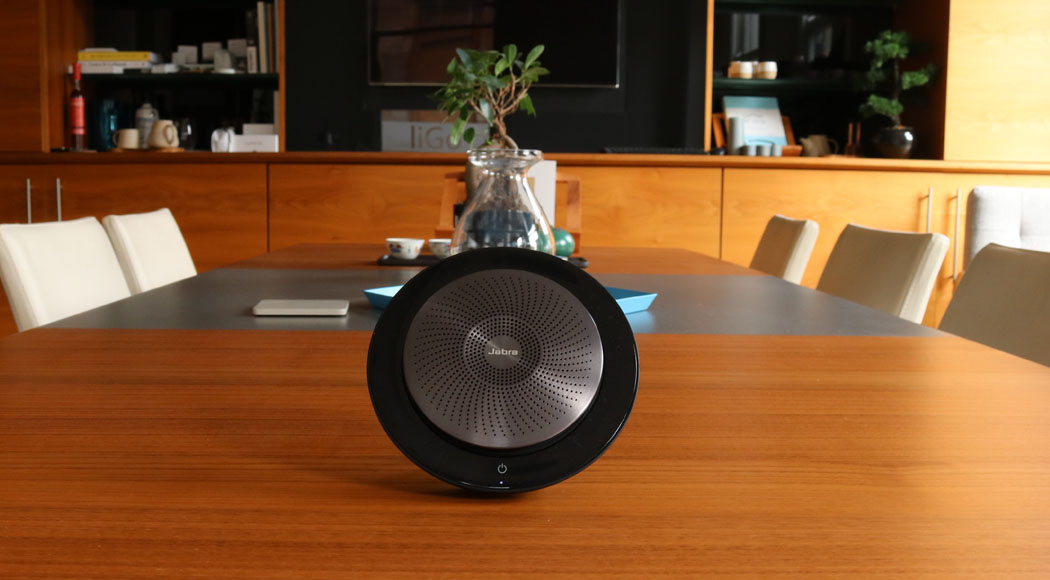 One of the most striking differences between it and its little brother has to be the stylish metallic centre surrounded by touch sensitive controls. 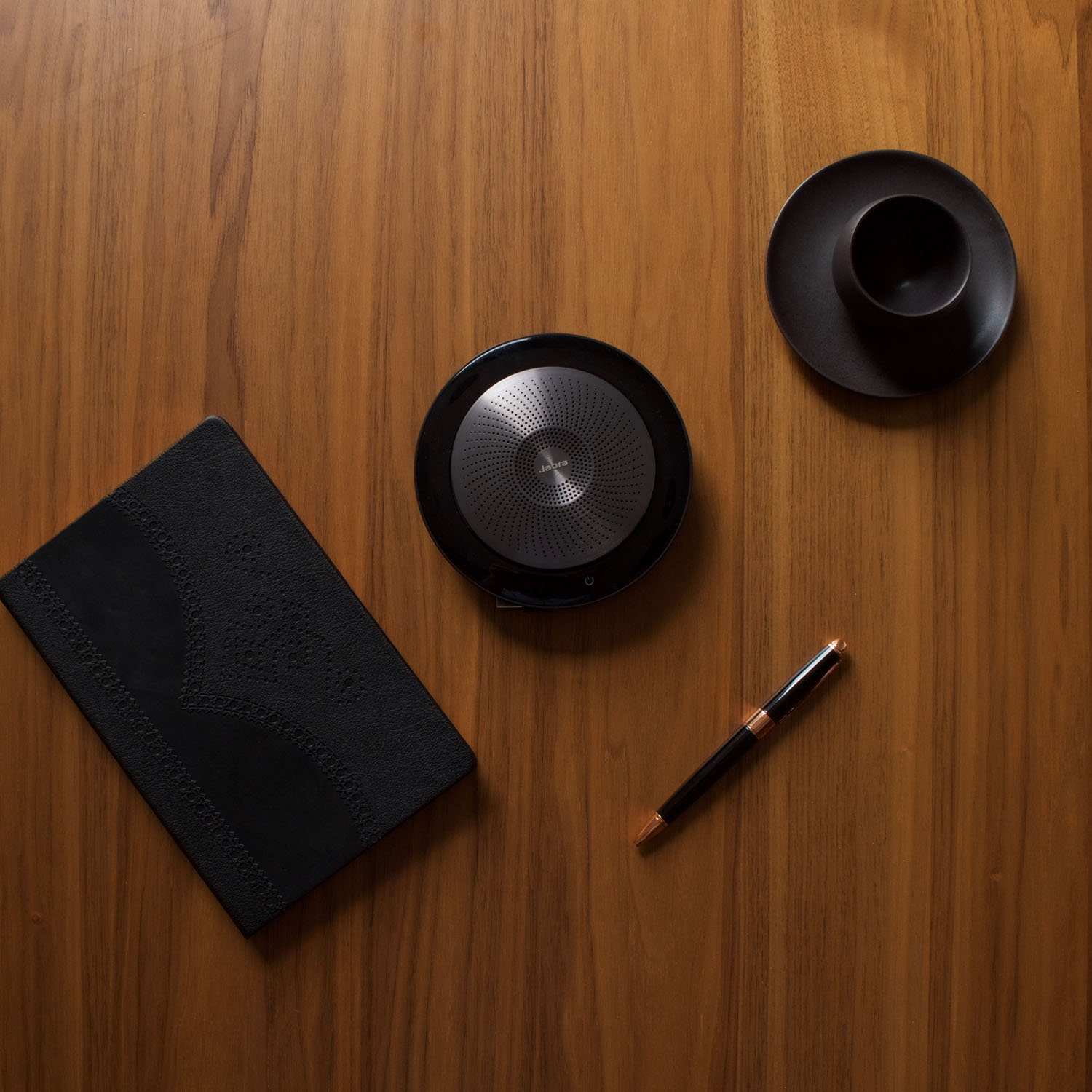 The Speak 710 also benefits from a new integrated kick-stand feature on the rear, which is ideal for propping up the speaker when you're using it to listen to music. 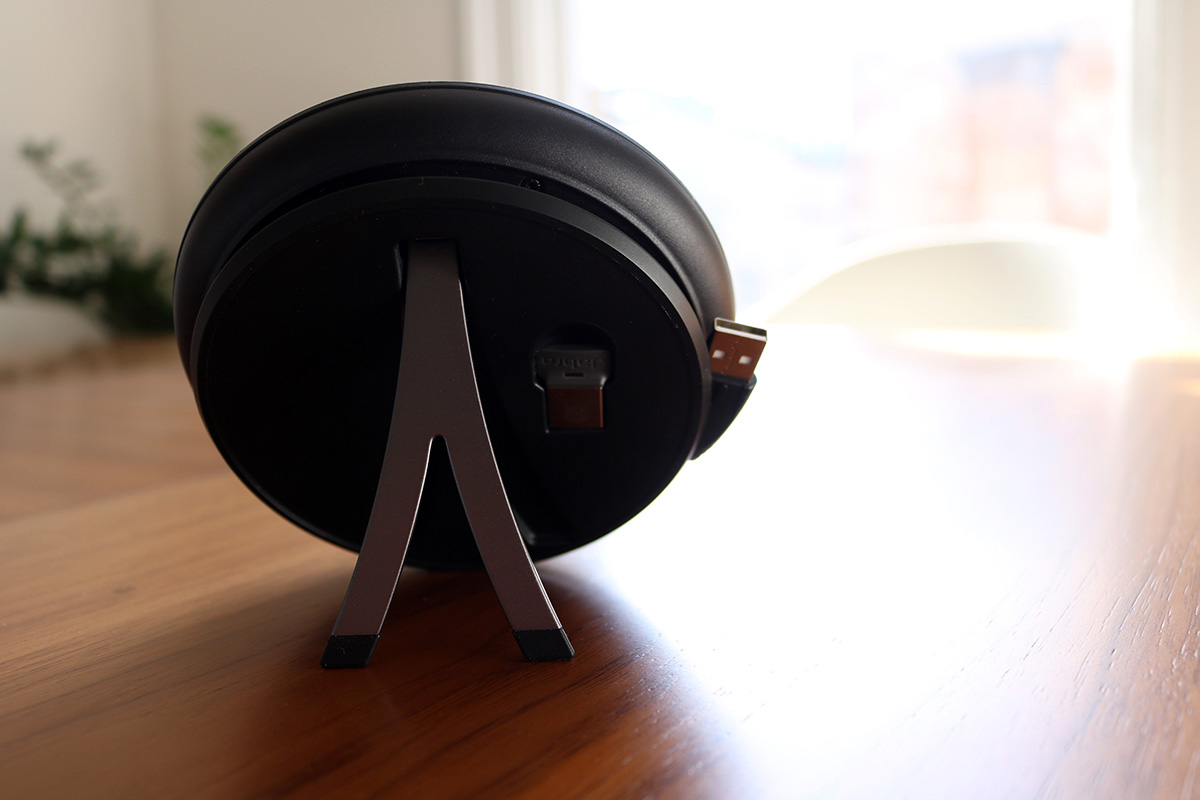 It would have been a crying shame if the set-up didn’t offer the same plug-and-play convenience of the Speak 510 as this was one of the main advantages of using it over more expensive Conference units. Thankfully the Speak 710 is just as easy and straightforward to connect. We tested the Bluetooth connection with two leading Smartphone brands, and a laptop without issue. We also tried via the USB lead and the Jabra Link 370 USB adapter and didn't encounter any problems. 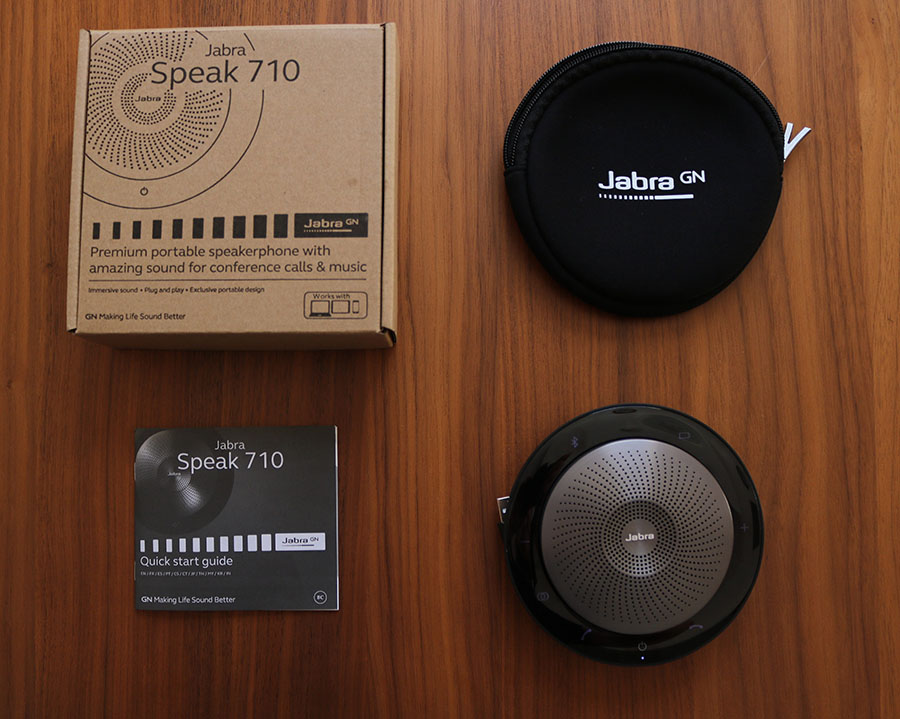 There is no denying that the Jabra Speak 710 delivers a superior sound experience when compared to our Speak 510, and similar products from competitors Plantronics and Sennheiser. With two units linked together the Jabra Speak 710 could be the best performing professional speakerphone there is. 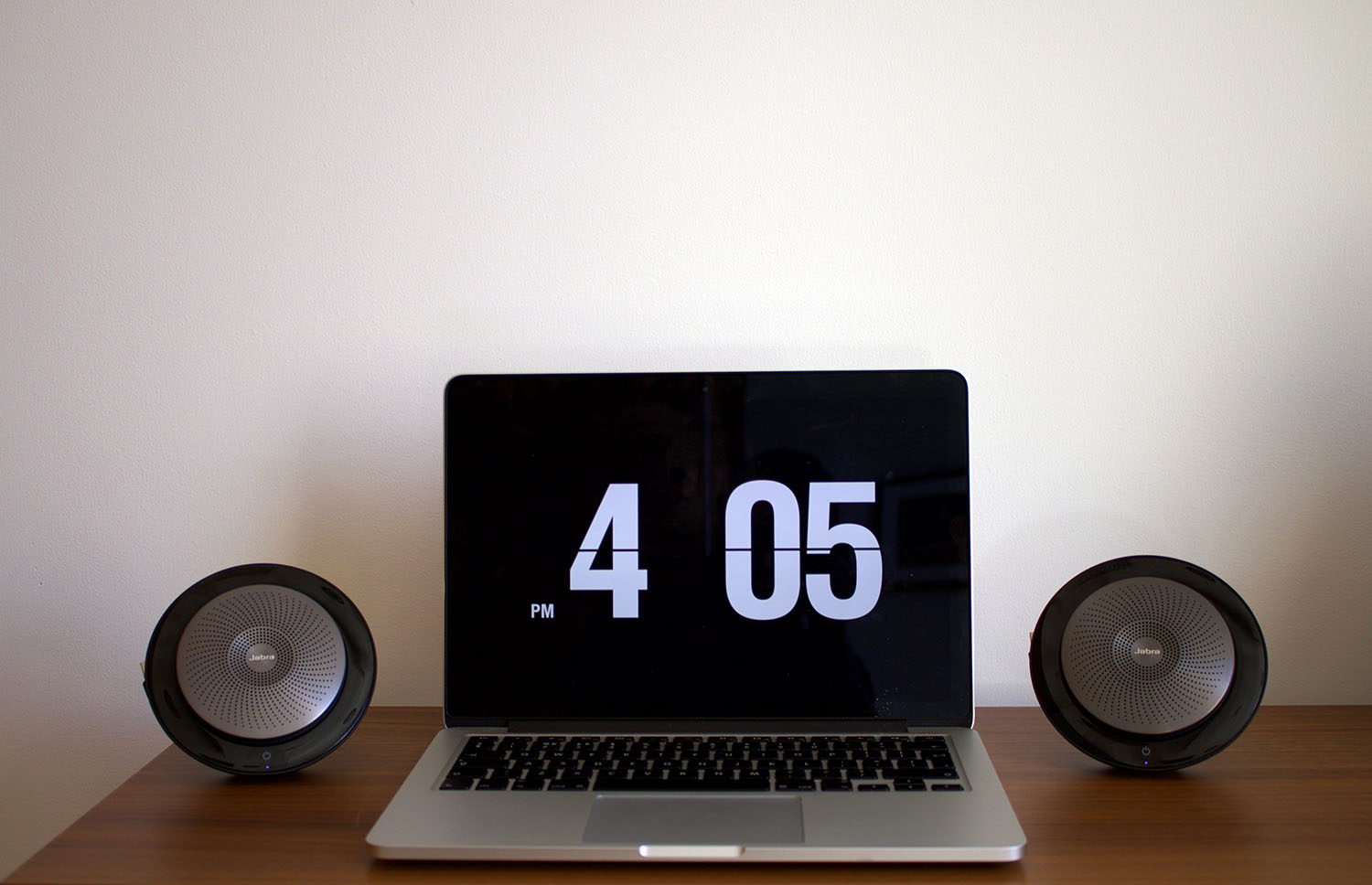 We tested the conference capabilities of the two Jabra Speak 710 with 5 of us round the conference table (although we’re all far too photo shy and ugly to appear in any of the pictures!) and as expected the call clarity was superb. The powerful omni-directional mic worked brilliantly to pick up each participant's voice clearly from around the table and the audio quality coming from the speaker was crystal clear. Afterwards we tested the Speak 510 for comparison and there was a stark difference. 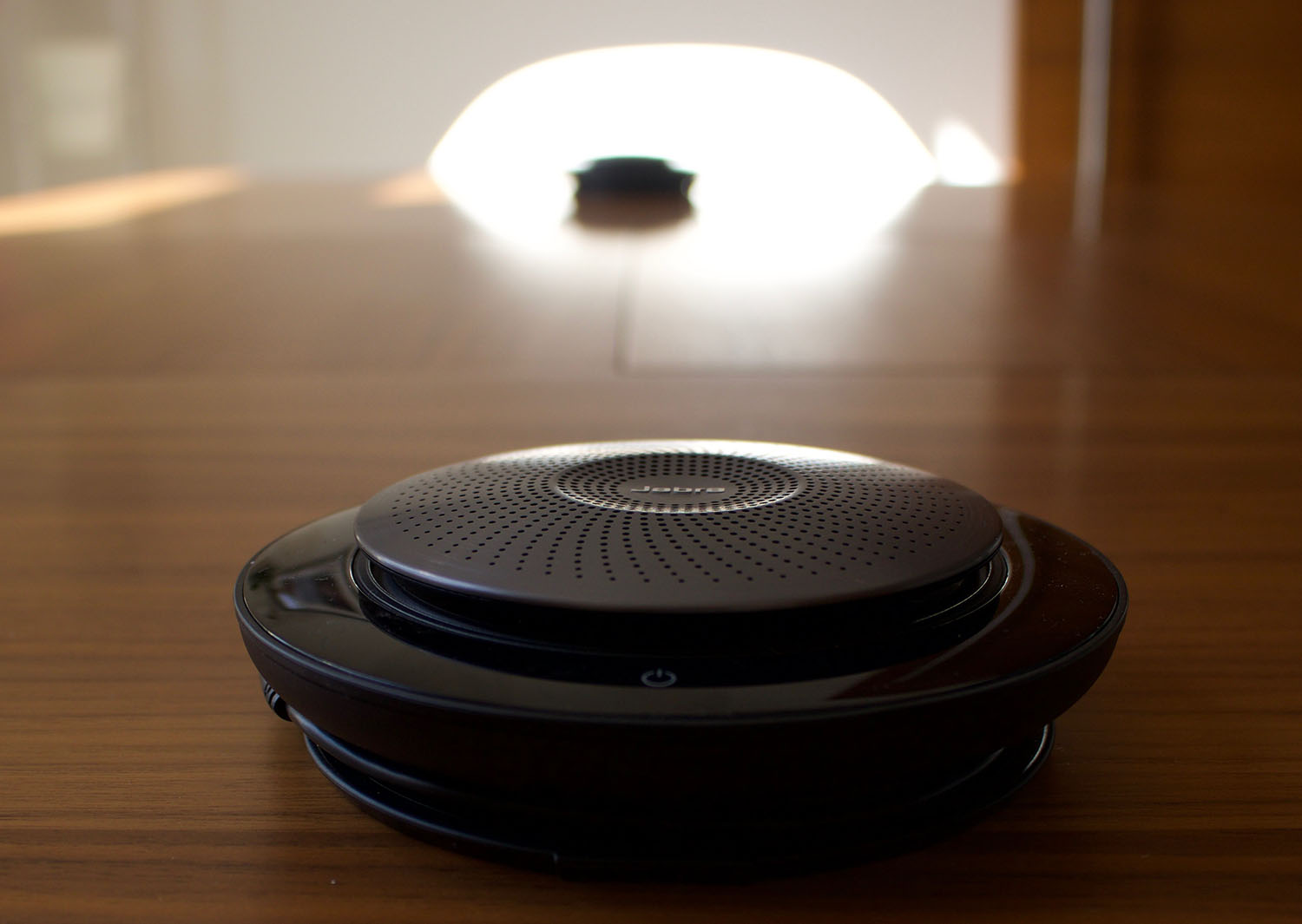 Perhaps one of the most exciting aspects of the Speak 710 is the facility to pair two together and use them as music speakers. We have a variety of wireless speakers in our office from the likes of Sonos and Bang & Olufsen so our expectations were pretty low. But I have to say we were pleasantly surprised by the performance. They might not be quite in the same league as the wireless speakers we're used to but there is no denying that the audio capabilities are impressive. 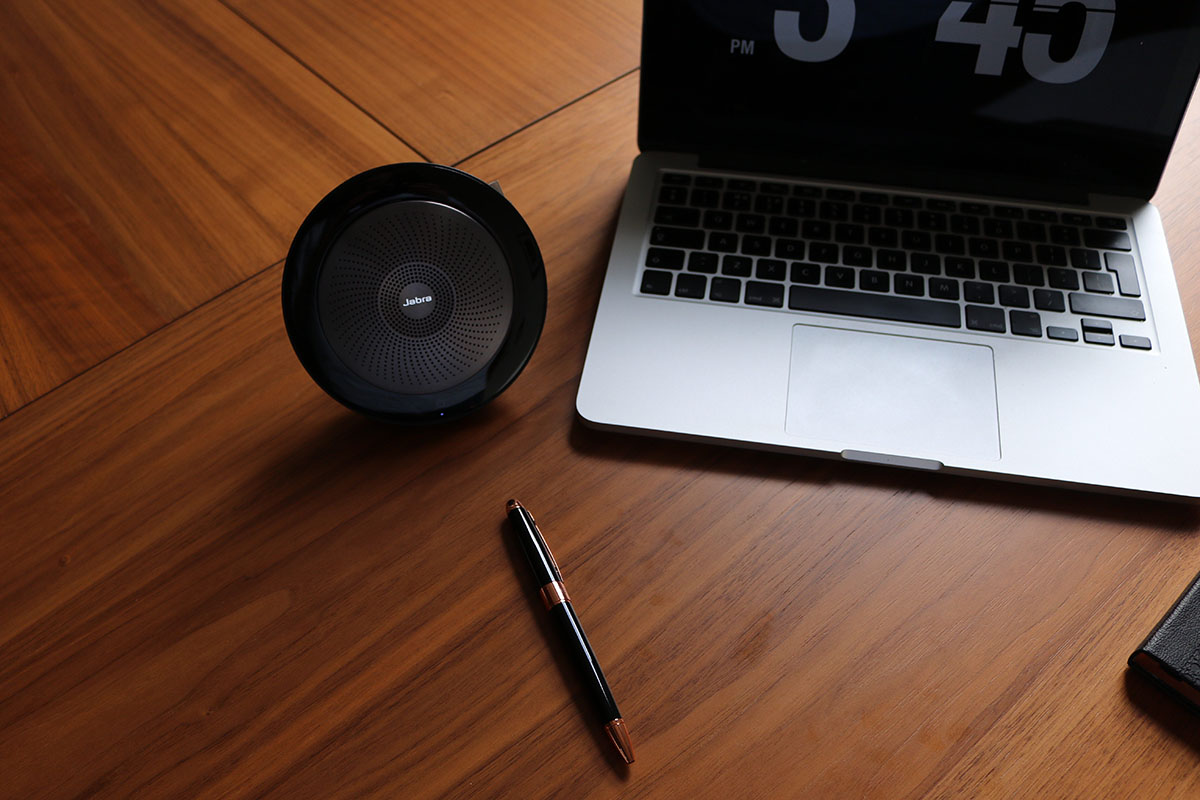 We might have been weary of the Jabra Speak 710 owing to the premium price tag (not to mention how much we love our Speak 510) but the Jabra Speak 710 certainly delivers premium quality. Delivering high quality sound in a professional looking portable design it is ideal for calls and music with no fuss set-up. The first truly professional and personal wireless conferencing device, the Speak 710 boasts an Omni-directional microphone for up to 6 ‘in room’ attendees, 15 hours battery life and a HiFi grade speaker for crystal clear conversation and music.


This entry was posted in Reviews, Headsets, Business and tagged Jabra, Bluetooth, Business, Speakerphone, Conference, Conference Call on 09/05/2017 by Craig.