The History of the Two-way Radio - Their Evolving Benefits

The concept of two-way radios goes back more than 100 years and the technology still remains prevalent to the current day.  Often referred to as walkie talkies, two-way radios are used to provide efficient communications in a wide range of industries including courier services, security and policing, aviation and even school systems.  In this article we will overview the history of two-way radios and their ongoing contributions to mankind.

When making reference to the history of the two-way radio, many cite the National Electric Signaling Company and their milestone of achieving the first transatlantic telegraphic communication back in 1907.  However, others prefer to go back further and speak on the true technological discovery.  In 1888, German physicist Heinrich Hertz proved it was indeed possible to send and receive electrical waves without using wires, though he didn’t truly understand its magnitude at the time.  In honor of this revelation, the unit frequency, Hertz, was named after Heinrich Hertz.

One of the most significant contributions to the two-way radio was made by Swedish engineer Ernst Alexanderson.  Alexanderson developed the first high frequency generator, an invention that enabled speech transmission.  This was done at the request of Reginald Fessenden, a professor and former associate of Thomas Edison who is known for pioneering the combination of sound and carrier signals.  Fessenden’s National Electric Signaling Company was the first to make long range voice transmission over 2kw, 100khz frequency using the Alexanderson Alternator.

With the technology unveiled, applications for two-way radios began to surface.  By 1912 Mariners were able to benefit from this form of communication as radio transmitters and receivers were employed on ships.  It has been argued that many of the people who survived the Titanic’s sinking were able to do so with the aid of Gugliemo Marconi’s radio equipment which enabled faster emergency communication. 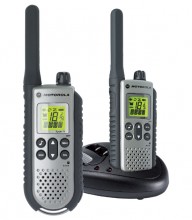 Birth of the Walkie Talkie

The first true mobile two-way radio is accredited to Frederick William Downie, an Australian policeman who introduced sets to patrol cars in 1923.  Many attribute the first official walkie talkies to the invention of Canada native Donald Hingins in 1937.  Others say it was Alfred Gross, Hingins’ fellow countryman who patented the technology a year later in 1938.

Some give the credit to Galvin Manufacturing Company, now called Motorola, who created the first device to earn the walkie talkie label in their SCR300 model.

Despite who was the first, one cannot argue that Motorola has been the most successful at developing the technology.  What was originally driven by a military need, the two-way radio has evolved into devices that are compact, lightweight and highly functional.  Today’s models typically offer between two and 14 channels to enable communications in locations consisting of multiple frequencies.  Other improvements to the technology include automated frequency scanners and hands-free applications.  The versatility and durability of the two-way radio makes it ideal for a number of purposes including industrial, commercial and personal usage.